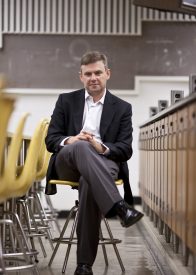 Robert Steiner is Director of the Dalla Lana Fellowship in Global Journalism at the Dalla Lana School of Public Health Sciences, University of Toronto. The Fellowship is the first journalism program designed specifically to teach outstanding specialists with graduate degrees or professional experience in a field how to cover their own disciplines as freelance reporters for media around the world.

Mr. Steiner began his career as a global finance correspondent for The Wall Street Journal with postings in New York, Hong Kong and Tokyo, where he was a finalist for the Pulitzer Prize, won two Overseas Press Club awards and the Inter-American Press Association Award.
After leaving The Wall Street Journal Mr. Steiner received his MBA from the Wharton School of Business, at the University of Pennsylvania and then worked as a business strategy executive, first at The Boston Consulting Group and later as Group Vice President in charge of Strategic Planning for Bell Globemedia, parent of the Globe and Mail and CTV. From 2006 to 2010, Mr. Steiner served as Assistant Vice President of the University of Toronto in charge of Strategic Communications.

Mr. Steiner has also held a number of senior campaign positions in Canadian politics. In 2003 and 2002, he served as health policy advisor and principal speechwriter for Hon. Paul Martin, during his candidacy for the premiership of Canada and during his subsequent tenure as Prime Minister-designate. In 2000, Mr. Steiner managed the Liberal Party of Canada’s new media campaign in the period leading to and during the federal general election, working for Prime Minister Jean Chretien.

Outside of work, Mr. Steiner is engaged in independent writing projects focused on the role of religion in secular society. He lives in Toronto with his wife, daughter and son.