By: Liam Mitchell, Associate Director of Communications, Faculty of Medicine. 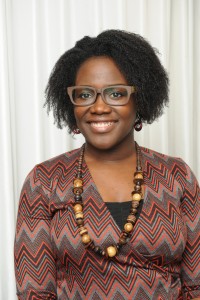 are born, grow, work, live, and age have a profound impact on their health. They refer to those factors as the social determinants of health. But there is an important one missing from the list, argues Dr. Onye Nnorom: racism.

In a presentation at Public Health Ontario (PHO) titled “Is Black Health a Public Health Issue? (Yes, thanks for asking!),” Nnorom reviewed how the effects of racism that occur over the course of a Black person’s life has direct and lasting consequences on health. It’s the result of systematic oppression that disrupts family units and keeps many Black individuals in a lower socio-economic state.

For example, Black children are more likely to be removed from homes by child protection services. They also drop out of the education system more often and have higher unemployment rates. This sets conditions in which the rates of hypertension and diabetes are more prevalent in Black communities, among other health inequalities.

Nnorom began her presentation, which is part of the PHO’s Grand Rounds series, by acknowledging the topic can be controversial. “The conversation can be uncomfortable, but it’s necessary,” she said.

One of the challenges of starting to address the health inequities among Black Canadians is a lack of data. “We don’t have a tradition of collecting racialized data here in Canada, and as a result, we don’t know the complete picture. We’re only able to surmise and extrapolate from the Canadian information we know, or try to apply findings from American and British studies to Canada,” said Nnorom.

In contrast with the African American community, which is more homogenous due to the impact of slavery, Black Canadians are from diverse communities with different heritages and traditions. That makes it difficult to apply American findings to the Canadian population. However, Nnorom notes that a successful model has begun through the Toronto Central Local Health Integration Network, called the Measuring Health Equity Project, which is collecting racialized data. And there is growing awareness among health professionals and policymakers of the need for this sort of data to drive decision making.

Nnorom, the Black Health Theme Lead for U of T’s MD program and Associate Program Director of DLSPH’s Public Health and Preventive Medicine Residency Program, asked three questions to frame this issue through a public health lens: is this a problem; is this a public health problem; and, is this “our” problem? To all three she answered a resounding yes, noting that it is especially pressing in Toronto where Black communities represent eight per cent of the population and are the third largest visible minority group.

In addition to collecting racialized data, Nnorom also recommended that racism be added to the Public Health Agency of Canada’s formal list of key determinants. One of the audience members suggested that a national collaborating centre, similar to the National Collaborating Centre for Aboriginal Health, could be established in the future to help guide research and knowledge exchange in this field.

The topic of Black health will be fully explored later this month at the annual Black Physicians Association of Ontario Symposium. It’s one of the primary forums for physicians and health care workers to learn the latest medical information on conditions affecting Black communities in the province.

“Our keynote speaker Dr. Husam Abdel-Qadir will speak about lowering blood pressure. Hypertension is a major issue in Black communities, which face lower life expectancies. But we’ll also hear talks on topics like breast and cervical cancer, arthritis and HIV prevention and treatment,” explained Dr. Paul Galiwango, a Scarborough-based cardiologist, and the Director of Continuing Professional Development at the Black Physicians Association of Ontario (BPAO),  who is organizing the conference.

“We build the program around what our attendees want to know, using their feedback from previous years to identify topics and potential speakers. Over the five years, we’ve built a strong program that is formally accredited,” he added.

The symposium will be held on Saturday February 25 at Mount Sinai Hospital. Both Nnorom and Galiwango are on the Board of Directors for the BPAO. “We welcome all health professionals from all backgrounds to attend the Black Health Symposium,” said Nnorom. “We all need to learn about the social and health disparities that different populations face, so that we can better serve our diverse patients.”