Public health researchers have long advised the Ontario Film Review Board to give movies featuring tobacco smoking an “18A rating,” but a new report by the Ontario Tobacco Research Unit (OTRU) finds that not only has the board sustained its inadequate performance in protecting youth from onscreen tobacco exposure, Ontario youth are exposed to significantly more tobacco in movies than U.S. youth. 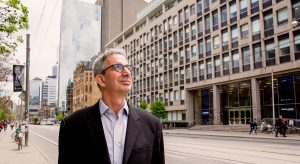 “We know that youth who are exposed to smoking in movies are more likely to start smoking than youth who are not exposed, regardless of personality characteristics or their friends’, siblings’, and parents’ smoking and alcohol use,” said Robert Schwartz, Executive Director of OTRU, and Professor at the Dalla Lana School of Public Health.

OTRU published the report, Youth Exposure to Tobacco in Movies in Ontario, Canada: 2004-2016, on July 7, 2017, which examines onscreen tobacco exposure among Ontario youth from 2004 to 2016.  Researchers found that Ontario youth had unrestricted access to 64 per cent more movies with smoking than their U.S. counterparts and, therefore, substantially greater potential for exposure to smoking on screen.

“Ontario has made minimal progress on reducing youth tobacco exposure through film from 2010 to 2016, and the problem is getting substantially worse with more movies featuring smoking being produced,” said Schwartz, also a Senior Scientist at the Centre for Addition and Mental Health.

Based on CDC models, Schwartz projects that at least 185,000 children and teens in Ontario will start smoking cigarettes due to exposure to onscreen smoking. These future Ontario smokers would be responsible for at least $1.1 billion in healthcare costs and at least 59,000 of these smokers are projected to eventually die prematurely from smoking related disease.

“An Ontario 18A rating for all movies with smoking would avert more than 30,000 tobacco-related deaths and save more than half a billion dollars in healthcare costs,” said Schwartz.