An international team led by Professor Xiaolin Wei has significantly reduced the widespread practice of prescribing antibiotics to kids with common colds in rural China. Their results were published October 25, 2017 in the The Lancet Global Health. 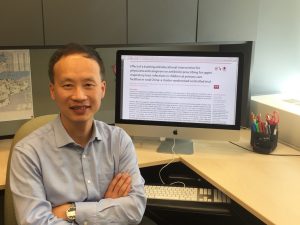 “Antibiotic misuse is high because parents demand care for their children, and for many, care equals medicine,” said Xiaolin Wei, lead author and Associate Professor of Health Systems and Clinical Public Health in Asia with the Dalla Lana School of Public Health and the Institute of Health Policy, Management and Evaluation.

Inappropriate antibiotic prescribing contributes to antimicrobial resistance, which makes infections and illnesses more difficult to treat and puts strain on the health-care system due to increased hospital stays and expensive treatments. Most research on reducing antibiotic use is conducted in Europe, U.S. and Canada, which have limited application to developing countries.

“It’s more challenging to talk about antimicrobial resistance in rural areas because there’s a lack of knowledge about when to use antibiotics and there’s less drug regulation. We need to work closely with health policy-makers, public health officers and clinicians to adapt the interventions into the local health system,” said Wei.

Prof Wei with public health officials from the Centre for Disease Control at the provincial and county levels, township hospital directors, and researchers

The study, “Effect of a training and educational intervention for physicians and caregivers on antibiotic prescribing for upper respiratory tract infections in children at primary care facilities in rural China: a cluster-randomised controlled trial,” was published on October 25, 2017 in The Lancet Global Health and is the first to examine effectiveness of implementing antibiotics reduction strategies in primary care facilities in a developing country.

Caregiver feedback was mixed, but Wei said that there’s a need for more education about antibiotics.

“Educating family physicians in rural China on how to use antibiotics, and giving them the confidence not to prescribe when unnecessary, is critical,” said Wei.

The intervention strategies will be scaled up to support the national antimicrobial stewardship policy in China and can also be adapted to other developing countries facing similar antibiotic overuse challenges.