Your questions answered: economic implications of the COVID-​19 pandemic

Your questions answered: economic implications of the COVID-​19 pandemic

On April 30, 2020, IHPME hosted its first COVID-19 webinar — the sixth in the DLSPH COVID-19 webinar series — exploring the economic implications of the COVID-19 pandemic. It featured four health economists discussing how integrated economic and epidemiological modelling could support policy decisions and provided insights into how Canada should come out of COVID-19 shut down.

One of the primary responses to the COVID-19 pandemic was to shut down large parts of the economy. While not a primary goal, economic shut-down was an unavoidable consequence of policies aimed at reducing contact among individuals to protect population health. When such policies were introduced, there were references to the economy being put on pause, bouncing back once the crisis had passed. 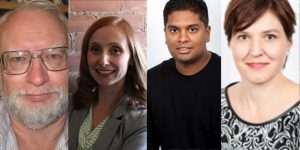 Professors Audrey Laporte and Brian Ferguson unpacked why this line of thinking is incorrect, supported by IHPME alumnae, Meghan McMahon and PhD student, Adrian Rohit Dass. With close to 60 questions asked, panelists were unable to answer every one. Here’s are some of the unanswered questions:

What testing capacity and evidence is needed in order to re-open parts of the economy?

It’s important to realize that we’ll probably never have the testing capacity that some re-opening proposals require, and that it will also probably be a long time before we have the information we’d need to have strong evidence on things like the infectiousness of the virus.

We suggested in the webinar that testing needed to be focused on those points where it would have the greatest incremental impact on mortality – testing the staff of seniors’ homes at the beginning of every shift, for example.

In terms of information, while the reported figures on hospitalizations and deaths are extremely valuable, it’s not necessarily relevant to employer in deciding whether it’s safe to call their workforce back to work.  It’s now clear that the severity of COVID-19 depends on the patient: seniors with health issues are worst hit by the virus.  What the individual employer and their employees need to know is how risky their particular workplace is.

For that we need to know more about how otherwise healthy individuals are affected by the virus.  While terrifying, the meatpacking plant episodes provided valuable information along those lines. They also underscore how easily the virus can spread under certain circumstances. This emphasizes that individual firms need to understand how easy it is for the virus to spread in their particular setting.

While we almost certainly don’t have enough data to do detailed statistical analysis of that point, we can use the information that’s been accumulating about how the virus spreads to let us revise our probabilities.  It seems pretty likely that crowded settings – sporting arenas and concerts, for example – are the type of place where infectious individuals may more easily spread the virus onto a lot of other people.  Separation does not eliminate risk, but it seems likely to reduce it greatly.

What should employers consider when calling employees back to the office/workplace?

Companies might consider not only how many people there are in the workplace, but how likely it is that any individual might be hit by a cloud of viruses.  Could it be, for example, that in particular workplaces wearing non-medical masks is sufficient to reduce the probability of infection to a relatively safe level?  That’s the kind of information which the individual workplace needs to have from public health experts.

Epidemiologists need one type of data to model the intrinsic dynamics of the outbreak, but the rest of us need to know how the virus spreads, how it affects anyone who catches it, what’s the relative riskiness of my workplace, and how can that be reduced?

How are different segments of society – including marginalized and vulnerable populations – being affected by COVID-19?

We’re realizing that a lot of essential work is highly labour intensive, not just in the nature of the activities involved, but also in the number of workers who have to be on site. On the other hand, while we haven’t seen data on it, a lot of non-essential work is probably pretty safe.  A lot of people in those latter jobs could probably be allowed to go back to work, so long as they observed basic precautions, while testing and the use of PPE could be focused on those areas of essential work whose workplaces are most sensitive to exposure.

The fact that certain jobs have been classed as non-essential doesn’t mean that they’re not valuable to the consumers of their products and to the economy, and the people who work in them would probably prefer earning an income to receiving benefits payments, so long as the level of risk could be reasonably mitigated. Further, while they’re generating economic activity, they’d be contributing to the resources and revenues available to tackle the threat.

We could even muse about people taking part of their pay in the form of government-issued COVID Savings Bonds, which would ease the burden of financing assorted programs. In a lot of those areas we could go through a transition stage, allowing workplaces and workforces based on the assessed risk from public health authorities, to go back, and customers to decide whether they wanted to use them.

What are your thoughts on a universal basic income?

There are a range of universal basic income (UBI) proposals that have their supporters, where the essential idea is to ensure a minimum income level that would enable people to meet their basic needs and which they would receive whether they are working, they are studying or unemployed.

The concept of “basic needs” isn’t quite as straightforward as it might seem – if people with disabilities, for example, are to receive targeted payments, you couldn’t simply replace the range of support payments by a UBI. It’s also important that any such system be designed so that it not penalize severely people who want to earn a bit of income but who, for whatever reason, can’t work full time.

Another approach favoured by some is to introduce a negative income tax as a potential mechanism which, since it would operate through the existing income tax system, may make it easier to get support payments to people quickly in future episodes.

Could opening up the economy result in a second wave and how can policies impact this?

We don’t know enough about the dynamics of this particular disease to be able to do any solid forecasting, so the range of possibilities is pretty wide.  It’s not uncommon in models of ecological dynamics for a policy which damps down the first wave of a problem to lead to large, rebounding, future waves, so we have to keep that possibility in mind.

We want to do our best to avoid stop-go policies. In economic models, those generally result in lower long-term welfare than do steadier policies. When we’re modelling this sort of thing we’re going to need to combine the anticipated economic impact of policy responses and the burden of the disease in the same model, and take a long-term horizon on both in the analysis.

There was some talk about considering “debt forgiveness” for the first time — is this feasible?

Debt is a serious issue under these circumstances.  It’s argued that one of the factors which made the great depression of the 1930s so deep was what was called a debt-deflation effect – people’s incomes fell but the value of their various debt obligations didn’t, so they were forced into bankruptcy.  However, broad debt forgiveness would amount to a large scale, unplanned, transfer from lenders to borrowers, and would be very disruptive.

It’s important to remember that a lot of lenders are individuals who have lent money, without really thinking about it, when they put money into their RRSPs, and a lot of borrowers are large corporations.  If debt includes things like rents, remember that the landlord (and these could either be residential or the managers of small malls, for example) probably needs that revenue to carry out their business activities, and indeed to live on.

An alternative which wouldn’t be as disruptive, but which could only be applied over a relatively short period might be some sort of debt moratorium. That would need to be supported by the financial sector, backstopped by the Bank of Canada, providing ongoing finance to their regular customers.  One limiting factor in this kind of approach is that it would basically amount to borrowers building up more debt, the longer they were being carried.

In the US, some members of Congress have been pushing for the Federal Reserve to make funds available to certain sectors of the economy. That would be a bad mistake, and fortunately not one which the Bank of Canada is likely to make, since it would amount to having the monetary authority deciding which parts of the economy were going to be favoured by its money creating capability.

We don’t yet have the data to do detailed analysis of how spending is shifting, although some data of that sort is starting to become available, and it’ll be a while before we know what happened to the savings rates of people whose incomes are continuing to come in.

With regards to the issue of how quickly small business can bounce back and of whether, when things pick up, there won’t be new small businesses ready to take the place of old ones which had closed their doors, it’s important not to lose track of the importance of the availability of finance in this process.  It’s unlikely that a small business can be opened using just the past savings of the entrepreneur.  There will certainly have to be some borrowing.

That means that for a new business to open there has to be a businessperson who’s willing to take the risk of borrowing and a financier, large or small, who’s willing to take the risk of lending to them.  Both conditions have to hold for the new business to be able to open – if only one of them holds, the idea won’t go ahead.  The more risk averse we are as we come out of this episode, the slower the recovery will be.

Will we be able to evaluate the impact of various policies – distancing, school closures, park closures, etc. – on the spread of the virus since those policies weren’t implemented in a controlled manner?

That’s the world empirical economists face all the time, which helps explain why you can get such disagreements about the effectiveness of various types of policies.

One thing that we’ll have going for us this time is that we’ll have a very large data set to work with, especially if we treat all of our provinces and the US states as separate units of observation and enter them into the data set on a par with European countries.

There are obviously going to be significant statistical challenges, but we should come out of this episode better placed to understand it and to prepare for future ones than we have been in the past.  Combining economic and epidemiological dynamic modelling will be challenging, but there has already been some valuable work done in that area, and we can be pretty sure that there’ll be a lot more done in the future.