Should STI/​HIV Testing be Offered Online?

Should STI/​HIV Testing be Offered Online?

DLSPH Researchers Study Ways to Remove Barriers to Testing for Cis and Trans Gay, Bisexual, Queer, and Other Men Who Have Sex with Men

A group of DLSPH academics and LGBTQ+ peer researchers are examining barriers to sexual health testing – and whether delivering testing online could improve the experience for cis and trans gay, bisexual, queer and other men who have sex with men (GBMSM).

Getting tested for HIV or other STIs online might seem impersonal. But that’s exactly the point for some men who would not be comfortable walking into an STI clinic – or who are not out to their family doctors, the researchers are discovering.

“We’ve found many people get tested by a primary care physician who is not necessarily well-versed in LBGTQ health,” says researcher MacKenzie Stewart. “It might be a relief for them to get a requisition online, go to a lab, and not have to educate their own provider.”

The peer researchers are members of the Toronto area LGBTQ2S+ community who are affiliated with DLSPH Prof. Daniel Grace’s new Centre for Sexual and Gender Minority Health Research. They became interested in exploring the acceptability of online testing to GBMSM in Toronto after the success of a British Columbia service, GetCheckedOnline (GCO), which has served about 16,500 people since launching five years ago. This research is funded by the Canadian Institutes of Health Research.

“This research is only possible because of our collaboration with public health partners and community organizations,” says Grace, “including the AIDS Committee of Toronto, the efforts of our interdisciplinary research partners and community advisory board members, and the work of Dr. Mark Gilbert, who leads research on digital sexual health interventions in British Columbia.” 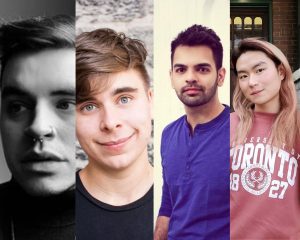 “Some people say, ‘if I want to get tested, I just get tested,’ and that’s great,” says Praney Anand, a research coordinator who works with Grace. “It’s great if you have a health care provider you can work with, and share your sexual history with, but there are people for whom that situation is not possible or ideal. Online testing may help to remove multiple barriers to testing and cater to people who don’t want to interact with a doctor because they don’t know how a health provider would take their queer status or judge them for their ‘risky’ sexual behaviours.”

The researchers have been talking to men in small groups so far, and have heard stories illustrating the stigma they face. “As an example, people would ask the doctor for syphilis test and the first question is: ‘what were you doing to put you at risk for syphilis?’” says Anand. “There are people who are not able to negotiate that with a health provider. Online testing might give them the autonomy to be in charge of their own sexual health.”

If a similar service were offered in Toronto, it would not replace existing clinics, but rather offer another option, the researchers note. In addition to reducing stigma, online testing could be more convenient to schedule and would allow test seekers to avoid waiting to see a physician.

To avoid the impersonality of online results, some men told the researchers they would prefer to choose whether to receive test results in person, delivered by a knowledgeable provider.  “That human interaction is comforting if you’re getting news like that,” notes researcher Heeho Ryu, who underscored the importance of GBMSM having multiple ways to learn about their sexual health.

Due to lockdown during the COVID-19 pandemic, these focus groups have been temporarily moved online. The researchers are aware that COVID-19 isolation may be skewing research participation toward a more privileged group. “Do you live alone, have a private space where you’re able to sit down at a computer?” asks Ryu. “If you live with family members and you’re not out, you’re not going to have that ability. Those specific voices in the community might be missing at the moment.”

In an attempt to address that barrier, the researchers plan to conduct several other rounds of socially-distanced in-person focus groups in the future when this is possible. Alternatively, participants can also choose to take part in a one-on-one interview.

So far, the researchers have found the men they interviewed are receiving less testing in the COVID-19 era. “A lot of focus group participants are saying they’re not seeing partners or engaging in sexual activities,” says Ryu. “They’ve said because of COVID-19 lockdown, I don’t have a need to get tested.”

Sometimes those on the HIV prevention medication PrEP, who normally receive STI and HIV tests every three months, are receiving one-time medication renewals over the phone, Anand says. Telehealth Ontario is also being used more. Some who would like to receive testing said that they have faced barriers due to COVID-19.

In addition to interviewing GBMSM in Toronto, the research group, which also includes Ezra Blaque, will be speaking with sexual healthcare providers such as STI testing clinic staff, pharmacists, and sexual health nurses. The research team is also hoping to expand their interviews to underrepresented groups within the GBMSM community, including those outside of the GTA.

“As a research team, we will continue to draw on multiple forms of data including interviews and surveys with diverse groups of sexual and gender minority men to understand their HIV and STI testing experiences and how we can remove barriers to access in Ontario,” says Grace. “One size does not fit all.”