Prof. Janet Smylie sees a change in the conversation about systemic racism.

The recently appointed Tier 1 Canada Research Chair in Health believes she is the first Indigenous person with kin and land ties to what is now known as Canada. She hopes to use the platform to advance the conversation even further.

“First Peoples in Canada receive second class healthcare services that for the greater part have been designed using non-Indigenous models and approaches,” says Smylie, a University of Toronto professor at the Dalla Lana School of Public Health and the Department of Family and Community Medicine at the Faculty of Medicine.

She is pleased about the award but prepared for the work ahead, which blends her medical and research background. From health care to research, it is all “relational.”

“I have the privilege and opportunity to develop those relationships with patients and carry that into my public health research and in Indigenous communities. Relationality, from my perspective, as a Métis woman is foundational to Indigenous social systems. The key, in my mind, is to never underestimate how important those relationships are,” she says.

Her goal as a Chair is to advance Indigenous models, standards, tools and capacities for the planning, delivery, and quality improvement of health services for First Nations, Inuit, and Métis people. She also plans to build on innovation methods and research partnerships to advance health systems performance measurement for Indigenous people through infosystems models, methods, and standards.

“Health measurement and health data seems like transactional things but when you think about it, it’s an important human resource,” she adds. “Health information is actually an extension of our sacred kin lines – of the blood and genetic memory that’s held in our DNA. It’s an observation about our health that’s rooted in blood memory. That’s a huge and awesome resource. We can use this to plan and develop thriving communities.”

But more importantly, she hopes to address anti-Indigenous racism in healthcare at the provider and system levels. She wants to speed up policy and practice translation of local community innovations using Indigenous knowledge translation and evaluation methods. 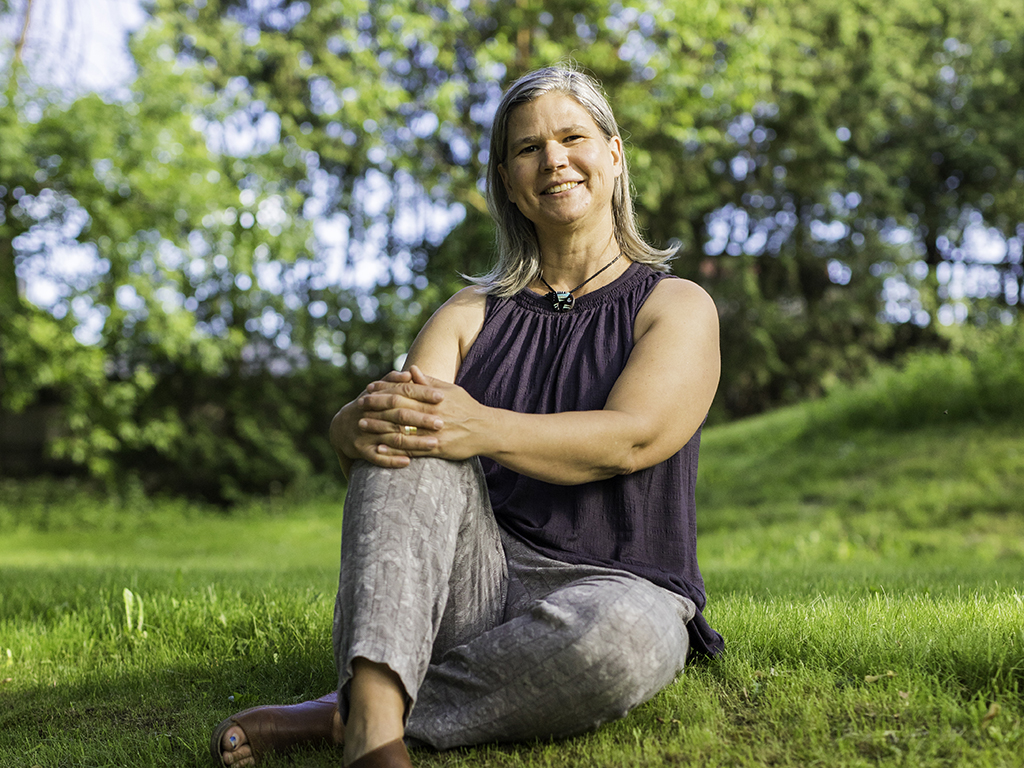 In her studies on anti-Indigenous racism, she has described the harmful and life-threatening racism Indigenous people experience when they try to access health care in Canada. As a Chair, her goals and plans are rooted in Cree concepts of attachment and relationality, something Madeline Dion Stout taught her, one of the founding members of The Well Living House at St. Michael’s Hospital.

The issues that Smylie intends to tackle have been pervasive throughout her career as a family physician. She grew up in a household that allowed her to nurture her interest in science. Her father who was of Irish settler descendence was a professor and theoretical physicist while her mother, who was Métis, was trained as a nurse in Saskatoon. She understands her privilege. “I was lucky – other people did the heavy lifting for me,” she says.

While Smylie enjoyed science, the self-professed science geek fell into medicine. At just 20 years old, she got into Queens University’s medical school. She enjoyed relating with patients, something science could not afford her at the time. Indigenous health was still poorly understood.

“And, it wasn’t worth self-identifying in the medical school program as Indigenous. On occasion, I would do that, but I was on my own journey in terms of understanding myself,” says Smylie. She lost her mother when she was a teenager, but she was fortunate to be surrounded by a large extended family, including her Métis siblings, aunts, and grandmother.

Her life experience was much different than that of many of her Indigenous peers. During her schooling in Kingston, she was aware that there were more Indigenous people in local prisons than at the university.

Smylie always kept herself involved in Indigenous health programs and associations, one being the Ontario Native Women’s Association, where she met ‘aunties’ who mentored her throughout her studies. But, by her third year of medical school, following placements in both northwestern Ontario and Guyana, Smylie realized that her services were needed in Canada. “I don’t need to be going anywhere overseas. I need to stay here.”

As part of her post-graduate training as a Women’s Health Scholar at the University of Toronto she went to Meadow Lake, Saskatchewan to practise rural family medicine. It was during that time, in 1996, that she received a call from Dr. Vince Tookenay, at the time the president of the Native Physicians Association of Canada. He was tracking down Indigenous physicians. At her first meeting, she met other Indigenous physicians and leaders who were advancing Indigenous health.

“Now, here in Toronto, we have leaders like come Dr. Lisa Richardson, who worked with Dr. Jason Pennington to establish the Indigenous education program in the Faculty of Medicine. We didn’t have those kinds of things when I was training, but I still had a lot more than others who came before me.”

Her pivot to research came in 2001. Smylie never got rid of her love for science but she insisted on making her learnings relational. Smylie worked for six years as a practicing physician, combining rural and urban work and even helped start the Wabano Aboriginal Health Access Centre in Ottawa.  While helping to implement a system for gathering patient accessing the center’s information, she recognized a system gap. The gap pushed her to register for a Master of Public Health degree at John Hopkins University.

She also jumped into leadership. “I took a leadership role with the Society of Obstetricians and Gynecologists. I was the first family doctor who got to chair one of their committees. They had an Aboriginal Health working group too. We published a guideline for healthcare professionals working with Indigenous people. We were aware that there were big gaps at the time. We were talking about “cultural sensitivity” and “cultural competency” more often than having explicit conversations regarding anti-indigenous racism.”

Soon after, while she was the director of the Indigenous Peoples Health Research Centre in Saskatchewan, she got a call from Prof. Patricia O’Campo who asked her to come and help develop an Indigenous health research program at St. Michael’s Hospital in Toronto.

“I worked with elder Maria Campbell. She advised me to carefully reach out to elders and knowledge keepers in my networks and get a council of grandparents together. Dr. Bernice Downey helped us plan and talk to various community partners to plan and implement the Well Living House action research centre.”

Together with a Counsel of Grandparents, they re-launched The Well Living House and signed a memorandum of understanding between leadership at St. Michael’s Hospital and elders that would ensure that Indigenous priorities and perspectives would guide all research.

“Some of the most rewarding things are when we actually see concrete impacts of our research. We have done a lot of work with Indigenous midwives. We were able to work in partnership with an Indigenous-focused midwifery practice – Seventh Generation Midwives Toronto – to assist them in planning a successful application that led their leadership in the establishment of the Toronto Birth Center.”

One of her biggest endeavour to date is the Our Health Counts research program.  In this arm of research, she is performing health assessments for the large majority of First Nations and Métis people that live in cities in Ontario including Toronto, Hamilton, Ottawa, London and more recently Thunder Bay and Kenora.

This research has already shown that there are two to four times more Indigenous people living in these cities than the census is counting. Along with proper counting of Indigenous people in Ontario cities, her team is finding mass inequities in social determinants of health.

“What we are also showing is that Indigenous people in cities can do a far better job of finding each other and collecting their own health information than Stats Canada can. And, that there is a strong sense of identity in communities, a strong language retention and we have an awesome social network.”

COVID-19 has worsened issues that were already known. Indigenous people living in urban centres are hit harder by the virus but what’s missing is “relational,” says Smylie. She is currently working on a project that aims to count the number of Indigenous people who have been infected, hospitalized, or died from COVID-19. “To my knowledge that data isn’t available anywhere else,” she says.

Equally challenging is finding data that unearths barriers that Indigenous people in cities are experiencing in accessing basic health and social services including primary healthcare, food and housing.

The problem Smylie sees in health services is the exclusion of Indigenous approaches and models. Externally planned programs are commonly still dropped into communities, she says. “There are many things that you can do to actually optimize Indigenous leadership and participation in your program and when one does that, the programs are actually much more effective than programs that don’t do that.”

“We called the Chair ‘Advancing Generative Health Services for Indigenous People,’” Smylie says. “It is rooted in a Cree concept around attachment through the ages. There is a rich library of diverse First Nations, Inuit, and Métis principles and protocols to support health and well-being that are time tested – as a Métis-Cree woman I am fortunate to have elders and knowledge keepers in my circles who are helping me understand our approach.”

The idea is to understand attachment and relationality using an interconnected worldview: For a person to be born into a context where all their needs are met first, we must understand and optimize the context in which the person is born.

“Imagine if you went to the hospital or you went to some form of mental health support. In addition to getting your immediate physical, your mental health and emotional concern are also addressed,” she says. “Your attachment to all people and things through the ages is enhanced.”

Medical science is catching up – over the past decades the conceptualization of infant attachment theory grows beyond the “blank slate.” A health scholarship is exploring intersectional drivers of health outcomes across the life cycle.

While devasting in impacts, for some, COVID-19 has provided some extra time to build and grow relational attachments, says Smylie. The opportunities to spend time outdoors and rebuild our relationship to earth are now. People and things are connected.

“This concept of relationality is powerful,” she says. “That’s what this Chair is intended to do.”