By Françoise Makanda, Communications Officer at The Dalla Lana School of Public Health

What was a therapeutic project for Alum Kyisha Williams won the minds and hearts of The Toronto Film School Film Festival as the Best Documentary of 2020.

Mothering in Quarantine is an honest video diary featuring Black mothers including Williams and their three-year-old as they juggle the commitments of motherhood, society and their wellbeing in lockdown.

“I use film for my own survival. This was really a practice of that,” says Williams, a 2016 graduate in Social and Behavioural Health at DLSPH. “I realized that I wasn’t making Mothering in Quarantine just for me or the moms that I knew. A lot of mothers and parents we’re going through similar things. A lot of people, particularly Black moms and moms of other backgrounds, reached out to me and just said, ‘thank you.” 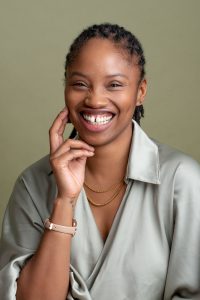 The nine-minute film is only a glimpse of Black mothers’ lives and the difficulties they face in Toronto in a pandemic. In one scene, a film subject catches on camera a difficult interaction she has with a man who questions why her children are playing outside.

“I do think it’s really important to talk about how we’re treated differently and how we’re automatically seen as problematic, dirty or bad moms because we’re existing.”

Williams says that even before the pandemic, as a Black mother, they felt judgement. From unsolicited advice to judgement on their appearance, it’s palatable, she adds. “It was just so irritating to feel like everybody felt like they knew how to parent my child better than me.”

Williams is also eager to revisit the way society views motherhood altogether. “Queer parents exist. Not everything is a hetero cookie-cutter situation. Even the courses that we take when we’re pregnant, often require a partner there to help with exercises. For a lot of people, that’s just not the case and so, instead of getting that information they’re just staying home because they’re like well ‘I don’t want to go as a single person’ not have a partner and be othered.”

Change begins in making space in our language for different experiences, says Williams. Williams also hopes to see more mental health support for moms going through postpartum depression – both for mothers and their children.

“What are the ways that we can actually support moms in their everyday? How can we get mental health supports available that are free and excellent? It would really take us a lot further. Emotional labour needs to be something that’s valued equally. Since the film’s debut, the documentary had been screened at Black Femme Supremacy film festival in the United States.

Williams went into the film industry wanting to merge the worlds of media and health promotion, two longtime passions.

“I realized that actually, I was in a really great place to blend them and that blending would add to my filmmaking and to my health promotion work. We’re just not reaching people who I felt needed to be reached,” says Williams. “Or seeing underrepresented communities on screen, so by combining these two methods, I really feel like I’ve been able to reach many underserved populations which is great.”

When the pandemic is over, Williams hopes to lead workshops and panel discussions about their film’s subject matter to spark conversations about health promotion issues. They also hope to circle back with their film subjects to see how they are doing and continue the series.

The documentary is available to watch on their Patreon page. Follow the link and subscribe to watch the film.