DLSPH epidemiology students have found that an influential paper may have overstated the safety of three feet of physical distancing to protect against COVID-19.

The paper observed no statistical significance between students’ risk of catching COVID-19 whether three or six feet apart in a classroom. The students worry that the authors’ interpretation may lead to more risky practices. 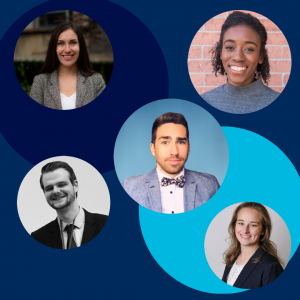 “When looking at their results, it would be inappropriate to conclude that there is no association between three feet and six feet. In fact, there appears to be a protective effect of six feet for a subset of the study’s findings,” says Daniel Harris, a PhD Epidemiology candidate who led the students’ commentary that was recently published in Clinical Infectious Diseases.

The main study did not consider masking and ventilation.

“We can see a 21 per cent reduction in risk and that is meaningful when students were distanced by six feet,” he adds.

Harris posits that the authors relied too much on the lack of statistical significance, or could not reject the null hypothesis when interpreting their findings.

When developing a research question, researchers form a hypothesis about what they expect to see from the data. They compare what they observed to the ‘null hypothesis’ or the assumption that there is no association or difference in the data. Using statistical analyses, a null hypothesis is rejected when the p-value is below 0.05, often indicating ‘statistical significance’.

The group argues that “[the original authors] relied a bit too heavily on the p-value, or statistical significance, when determining whether an association was present. Another important part of that interpretation: how big is the actual difference between three feet and six feet?”

The students’ commentary explored how bias may affect the study’s conclusions. The group believe that students were unlikely to perfectly adhere to the three- or six-feet distances.

When a reasonable amount of measurement error was accounted for, students found an even greater benefit of six feet over three feet of physical distancing—a 40 per cent reduction in COVID risk instead of the 21 per cent reduction observed from the original results.

“Students are unlikely to adhere to three or six feet the entire time. There’s probably going to be some mixing of exposure between both groups,” says Harris. “There’s probably a notable degree of error in how distance was measured and we can use statistical methods to explore the impact of that error.”

The paper’s original authors have responded to the students’ commentary, standing by their findings.