Iman Musani, the outgoing co-president of DLSPH’s Public Health Student Association (PHSA), is headed back to school at U of T.

After spending two years in DLSPH’s Division of Epidemiology, she will pursue an MA and PhD in clinical psychology under the supervision of Prof. Jeffrey Ansloos.

After studying psychology at Western University, Musani wanted to strengthen her understanding of public health.  “I wanted to work at a population level, but I didn’t know how I would do that,” she says. “Epi seemed appealing because I had a stats background, and I figured that it would be a good combination of skills.”

While the program provided her with the hard skills she needed in the classroom, it was during the pandemic, as the PHSA grappled with the pivot to online education, that Musani learned to appreciate what public health looks like beyond the coursework.

How was it working with colleagues who look at public health through different lenses? 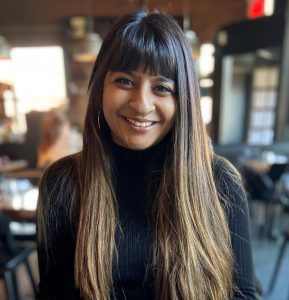 From the epi perspective, we see a lot of things as numbers. And because our courses are very geared towards being analytical, we approach problems of public health that way.

In a direct contrast, our health promotion colleagues are able to see the nuances that exist around some of these issues that we may have never considered. In a PHSA context, for example, it’s been really helpful, because a lot of the things that Sarah Richter and I would have missed, were captured through some of our friends and teammates who have learned about a lot more of these issues in public health.

What attracted you to DLSPH?

I was most attracted to the two practicum opportunities, because, on top of the great name (U of T), the opportunity to do two placements in the field was definitely unique. And I didn’t really see that in any other program.

And also, I just thought that there might be more opportunities being in downtown Toronto, having all these leading hospitals and research settings around us. A lot of the faculty are part of these hospitals as well and I was excited to learn from them.

You went from psychology to epi, and back to clinical psychology. What was the rationale behind that?

Well, actually, the research I’m going to be doing is a hybrid between public health and clinical work. Being in this program taught me that you can’t really separate public health and clinical practice. They have to kind of work together in order to be effective. If I have the opportunity to do both, then I would love to do both. I developed a lot of passions that I want to bring into the world of clinical psych, which is still very much dominated by older ways of thinking.

Some people just focus on their studies, but you decided to be part of the PHSA. What led you to do that?

In my first year, I attended all of the orientation week events. I met the friends that I have today from those events and all of the opportunities the PHSA provided us in first year. I have had a really positive experience with the PHSA. I like being involved, that’s also just kind of the person I am. But I think it really enhanced my experience. Part of learning is in the classroom but also learning from each other.

How would you say the role of the PHSA has changed?

The culture of what is expected from institutions has changed over the past year. In the past, the PHSA was very much plans, events, and what’s going on at the school.

Now, we really are the voice for students. And I think it’s become increasingly clear that in the past, we’ve been a voice for some students, but not all of them. We have to do better in that sense.

So there’s kind of this notion of course correcting—it won’t happen overnight but we have to keep taking steps to do better. We have a lot of faith in the incoming PHSA team to keep pushing forward.