The recent MPH graduate worked with DLSPH Prof. Roberta Timothy and fellow student Falan Bennett as co-investigators on the Black Health Matters COVID-19 survey about how Black people were impacted by COVID in the diaspora. 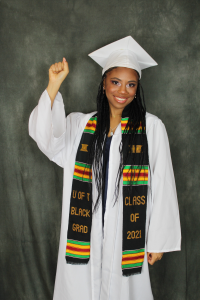 “In doing that research, it also opened up my eyes to see there’s this narrative that during this month specifically, it’s also a time for Black people to be celebrated,” she says.

While early results point to a wave of health inequities and economic disparity, the Black diaspora resisted through actions such as marches, says Blake-Hepburn. She also observed Black-led interventions within the community.

“And Black people were creating spaces of healing, virtually or in-person.”

She also sees Black History Month as a time to look back on the promises that were made in the summer of 2020, when protests erupted across North America after the murder of George Floyd by a Minneapolis police officer.

“I think Black History Month is an opportunity for a lot of institutions for the government to take accountability for colonial and anti-Black systems and policies, and how that impacts Black health.”

A time for Black people to celebrate, Black History Month is also an opportunity to bring forth narratives that need to be changed.

“Two years ago, we saw with the Black Lives Matter protests, everyone was saying that we’re going to do these things for Black people,” says Blake-Hepburn. “And we were seeing all these statements and they sound pretty but it’s been a year later and if you were to look at some of the actions that followed up behind that, you would see nothing has really been done.”

The alumna’s studies have led her to understand that policy at the macro-level has an enormous effect at the micro-level, especially on Black health.

She had gone through high school and her first year as an undergraduate at U of T with an interest in medicine. But a first-year course in sociology and societal institutions opened her eyes to the intersection of colonialism and capitalism and its impact on health.

Blake-Hepburn sought out more courses and decided to major in health studies. She learned about the social determinants of health, the impacts of racism, income, and gender on health.

“That positioned me or redirected me from medicine which more or less focuses on the individual level of how to treat a person’s illness to how to treat societies’ illnesses.”

Her redirection became clear: she needed to focus on public health for a broader impact.  But “I’m still interested in medicine—the door is still open,” she adds.

Blake-Hepburn is also still debating on a PhD focusing on Black maternal and infant health. For now, she is eager to have an opportunity to work at the policy level where change happens, and barriers are removed. She is currently working as a research assistant with Professors Erica Di Ruggiero and Shaza Fadel to understand how Canadian public health officials and religious leaders collaborate to build vaccine confidence in ethnic or racialized communities and on social media.

“When I think of Black health, I tend to think a lot more upstream. I think it’s really important to get to the root causes,” says Blake-Hepburn who took a social determinants of health course with Prof. Arjumand Siddiqi.

“Policies are part of the “determinants” of social determinants. It picks up at those root causes and it looks at how those systems impact, how policies are made and how they’re disseminated at the societal institutional level. It also impacts on how people make choices at the individual level and what choices people can make.”

These determinants of health are less favourable for Black people because racism, income and post-colonial policies hamper Black health. Despite those challenges, this month, Blake-Hepburn wants to ensure that Black resistance is highlighted.

She has been fortunate to read about how Black people have overcome through the Black Health Matters COVID-19 survey. It helps flip a negative narrative that is often tagged on Black people, she says.

“It’s good to have those [successes] highlighted because then it ensures that people aren’t just seeing Black people as weak or falling within this oppressed label. But understanding that Black people and Black communities do have agency when it comes to creating forms of resistance and interventions to resist colonial and oppressive regimes, policies and practices.”