Melanie Jeffrey, one of our amazing postdoctoral research fellows, will be speaking at an event called Decolonizing Healthcare in Canada: Storytelling and Discussion with you! This event is on Tuesday, February 26th from 2:30-6:30pm, with a blanket exercise and dinner from 2:30-5:30pm and a discussion from 5:30-6:30pm. The discussion will be focused around the unique challenges impacting access to and the delivery of healthcare, including disparities between urban, rural, and Indigenous territorial settings, as well as the incorporation of traditional teachings and needs. Feel free to come to one or both parts of the events and make sure to register on the Eventbrite link. Read more.

On January 17, 2019, the Ontario Institute for Studies in Education hosted the National Indigenous Mental Health Gathering, which brought together Indigenous scholars from across the country — including WBIIH faculty, students and partners — to discuss important issues facing our communities such as mental health, life promotion, and well-being. 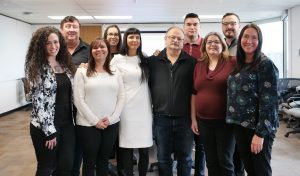 In collaboration with the Lawrence S. Bloomberg Faculty of Nursing, WBIIH hosts a monthly drum social to bring the community members together from DLSPH and beyond. We are fortunate enough to have these socials facilitated by the Spirit Wind Women’s Hand Drum Group.

This style of singing brings women from all over Turtle Island together and offers them an opportunity to practice and live Native spirituality in traditional as well as non-traditional settings. Women’s hand drum social singing is a relatively new tradition, however, the drum itself has been acknowledged as the heartbeat of Mother Earth since time immemorial. The drumbeat reminds of our relationship and connection to Creation. Read more.

The Youth for Water program was created to empower Indigenous youth in the Peterborough, Ontario area with an interest in becoming water leaders who are unsure of which direction to take their passion. We are currently working to engage Indigenous youth from across Ontario to participate in a weeklong conference where they will receive training and support to design their own water project in their home communities. Read more.

This one-day symposium will cover issues related to Indigenous public health and healing in mental health. It is for educators, practitioners, researchers, and policy makers of all disciplines of applied mental health interested in enhancing their knowledge and skills, exchanging perspectives, and exploring new ideas.  Read more.

The third CAC meeting was held in Vancouver, British Columbia and chaired by Dr. Margo Greenwood on September 20 during which Mr. Harold Tarbell, a strategic planning consultant, led the discussions to gather information that will inform the direction of the WBIIH with the intent to improve Indigenous Peoples’ health. Guests from the Rick Hansen Institute, Chief Executive Officer Bill Barrable and Strategic Implementation Director Penny Clarke-Richardson, also attended to discuss common goals and identify how RHI and WBIIH can work together and consider partnerships. On September 21, CAC youth members, Ms. Lindsay Dupré and Ms. Hayley Moody along with the support of CAC members chaired the meeting where members discussed the Request for Proposal program, the Collaborative Program in Aboriginal Health, WBIIH leadership and governance including the role of CAC members.

The Summer Mentorship Program (SMP) gives high school students of Indigenous or African ancestry a chance to explore health sciences at U of T over four weeks in July. WBIIH organized two SMP sessions on July 7 and 22, 2016. The sessions were interactive research mock exercises conducted by Drs. Anita Benoit, Raglan Maddox, Ben Brisbois and Lori Chambers.
Sixty students participated in the SMP research mock sessions where they learned about research methodologies including conducting surveys and interviews. On July 18, 2016 WBIIH organized a dinner for SMP Indigenous students. The dinner allowed students to interact and get guidance from Indigenous leaders/graduates in health research.

Anita Benoit, Comparing ART interruption, time to virologic suppression and morality between Indigenous peoples and people of other ethnicities living with HIV

The WBIIH is helping to develop recommendations for U of T’s Truth and Reconciliation Commission (TRC) Steering Committee. Professor Nowgesic is co-chairing one of the committee’s five working groups with Professor Lorraine Ferris, Associate Vice-President of Research, which is examining Indigenous Research Ethics and Community Relationships. Professor Benoit is a member of the Indigenous Curriculum working group.

WBIIH hosted a reception in honour of the community-based cancer and environment study in Northern Ontario conducted with Chief Darlene Comegan of Northwest Angle 33 First Nation. Elder Clifford Thomas presided over the reception and The Little Embers from the Toronto Council Fire Native Cultural Centre performed.

Liberals to fund water plant for Neskantaga First Nation in 2016

The inaugural WBIIH Community Advisory Council meeting was held in Toronto, Ontario and terms of reference were drafted to guide the council to act in an advisory capacity to the Institute. The council works with the WBIIH Director and Dalla Lana School of Public Health Dean to guide and direct the strategic direction of the Institute and promote community-driven and relevant scholarship, education and partnership. This 20-person council includes Indigenous scholars and other experts from academia, the healthcare sector and support services and community members at large and is chaired by Dr. Margo Greenwood.

Dr. Suzanne Stewart, WBIIH Director, featured in fall 2017 U of T Magazine in the article, A Refuge from the Streets. Read more.

Dr. Michael Dan received an honorary doctor of laws from York University on June 20, 2017 in recognition of his work in social innovation, as a humanitarian, and for his role as a philanthropist. Read more.

Dr. Michael Dan, ex-officio and honorary member of the WBIIH Community Advisory Council, was appointed a Member of the Order of Canada on December 30, 2016. Read more.

Earl Nowgesic mentioned by Canadian Federal Health Minister, The Honourable Jane Philpott, on Twitter for his Indigenous Red Ribbon Storytelling presentation at the at the International Indigenous Pre-Conference on HIV & AIDS on July 16, 2016. Read more.