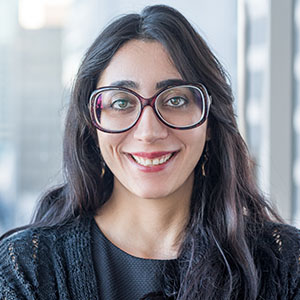 Upon meeting Sara Shearkhani, one can’t help but be in awe of her drive and determination, as she juggles a busy and at times tumultuous schedule. Constantly on the go, she is in the midst of her first year as a PhD student in the Health Services Research Program at the Institute of Health Policy, Management and Evaluation (IHPME). Much of her time is also spent on the volunteer initiative Family Caregivers Voice which she co-founded in 2014 alongside Carole Ann Alloway. Her hard work and dedication was rewarded on May 6, 2017 when Shearkhani was presented with the Canada Cares Caregiver award recognizing caregivers for their outstanding dedication and commitment.

At age twenty-eight Sara Shearkhani’s world was turned upside down when her husband aged just thirty-two, was diagnosed with cancer of the brain and required intensive care for a growing tumor. She and her husband were new to the country, having just immigrated in order for Sara to complete her PhD in economics. Now it seemed as if everything had come to a halting stand still. “I remember feeling very depressed after the cancer diagnosis,” says Shearkhani, “it was like a part of my life was over and all of these ideas I had, about how our life was going to be, just disintegrated.”

Knowing she wanted to work as a researcher, but lacking in experience and unable to continue with her studies, Shearkhani took on a job as a conference events researcher, and was lucky enough find herself working on events relative to the healthcare sector.  It was in this role that she was first introduced to Patients Canada an organization geared towards championing health care change that matters to patients. After receiving support from the organization Shearkhani knew that she too wanted to give back and help others in situations similar to her own.

“In my mother-tongue we don’t really have a word for caregiver, so it was not a term I was familiar with and it was not something I thought to identify myself as,” Shearkhani explains. It was only after volunteering with Patients Canada, that Shearkhani learned the term “caregiver” came with its very own rights and responsibilities.

Encouraged by those individuals who offered her support within the organization, Shearkhani decided it was time to tell her side of the story, because often, caregivers are overlooked when it comes to the journey of an ill patient. Shearkhani’s personal piece was published by The Globe and Mail in June 2014, and shortly after its publication she began to receive countless letters from individuals who connected with her story. One such individual was Carole Ann, and it was through their correspondence that the idea for Family Caregivers Voice came to fruition. “We started as a support group but soon realized that we needed to do more; we chose to focus on educating caregivers on their journey and healthcare professionals on the caregivers’ role encouraging them to value these individuals as  members of patient’s care teams,” says Shearkhani.

From its early beginnings, Family Caregivers Voice has set its sights on educating caregivers about their journey, the stages of caregiving, and most importantly the issue of caregiver burnout. “A lot of caregivers are really appreciative of my honesty when we conduct presentations, especially with respect to the issue of burnout, and how it affects the caregiver and care-receiver relationship,” notes Shearkhani. The volunteer initiative conducts presentations in healthcare organizations or provides support to caregivers over the phone, whatever is most needed.

Along with other group members, Shearkhani initiated a request to the University of Calgary’s O’Brien Institute to take part in PaCER training (patient engagement research) the goal of which was to complete a patient engagement research study. With the support of St. Elizabeth Health Care, Shearkhani and her group members managed to create a PaCER chapter in Toronto. They completed certification and published their findings entitled “Uncovering the Experiences of Patients and Caregivers as Couples,” in 2016.

For Shearkhani, winning the Canada Cares award, was an important recognition, one that she says made her feel as if she was home. “In 2015 I received the Face of Change award from The Change Foundation, and at that moment I felt that this was a significant move in recognizing family caregivers as part of the healthcare team. Now, winning this award from Canada Cares a few years later feels even more momentous because I know there are now additional groups who are thinking about caregivers and taking the time to offer them recognition; it marks, I feel, the end of my personal journey as a caregiver.”

Shearkhani hopes that Family Caregivers Voice will move into its next phase as a not-for-profit organization in the next year, and continue its work in educating others and changing the care culture, especially for caregivers. However, she will have to leave much of that work to her co-founder Carole Ann, as Shearkhani focuses on her new venture, completing her PhD.

“Someone told me once that I didn’t ever write about my experience as if there was a silver lining,” says Shearkhani, “but today I can say that my husband’s cancer diagnosis was perhaps a blessing. I changed my career path because of this experience, choosing to study health services research, and now I am able to continue my PhD, in a department I truly care about. It has changed me and who I have become for the better. And that is in fact, the silver lining.”