Asst. Prof. Roberta Timothy has been appointed Black Health Lead at the Dalla Lana School of Public Health – part of a School-wide initiative to embed equity and anti-racism throughout the curriculum, and to advance research and education in Black population health. 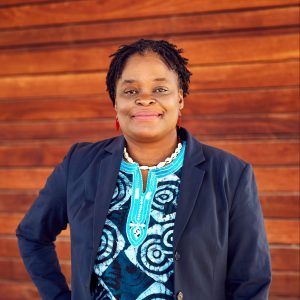 “It’s exciting, it’s scary, it’s humbling to be able to create new programming dedicated to public health from a local, national and transnational perspective,” says Timothy. “This will be built from an intersectional lens, looking at race/anti-Black racism but also gender and sexual diversities, age, disability, religion/spiritualities, colonization and migration experiences and much more. It’s such an opportunity to talk about areas of empowerment and resistance.”

Timothy joined DLSPH’s faculty in 2019, after teaching global health, ethics and human rights at York University’s School of Health Policy and Management. She earned her PhD from U of T in adult education, community development and Women’s Studies. Her academic work is informed by an African/Black feminist perspective developed in early childhood.

“I became an African/ Black feminist at age 8 or 9,” recalls Timothy.  “I grew up going to marches, boycotting things, writing poetry, being involved in activist theatre. I saw Angela Davis speak, heard Sweet Honey in the Rock playing. I was involved in the women’s movements, Pan-African, and Anti-Apartheid movements, among others. That really shaped the work I do today.”

Growing up, Timothy’s family was one of the first Black families in her Scarborough working-class neighborhood. She experienced anti-Black racism daily, but she also saw how racism and poverty were intertwined and related to health.

“They burned feces in our yard. I was called n— every day,” she recalls. “But then you’d see those same families eating out of the garbage, and my mom would give the kids food. I learned how to see the complexities – what happens when people aren’t treated humanely. My mom said yes, you are having this experience but you can also make change.”

Although she has degrees in counselling psychology, sociology and political science, Timothy chooses to work in public health because she sees political struggle as deeply connected to health.

“Having access to health and wellness –which means anti-racism, decolonization, race-based and intersectional-based data — that is all political,” she says. “Having access to healing is political. A public health system that treats the health of Black folks as important is a political act, and that’s an amazing thing.”

Through her new position, Timothy is eager to expand the Black Health community both at DLSPH and outside the walls of academia.

“Connecting with community is crucial because Black health is community health,” she says. “How do we create real inclusion within the Black community? How do we address issues of internalized white supremacy? We want to not only uncover but dismantle white supremacy in the health system.”

“There’s a lot of folks doing amazing Black health work at U of T and other places. I’d like to invite them to be part of what we’re creating,” she adds. “We see the consequences of anti-Black violence, and it’s a real critical move to prioritize Black health and actively create changes.”