Congratulations to IHPME Professors Greg Marchildon and Sharon Straus, who were appointed to the Order of Canada.

One of the country’s highest civilian honours, the Order of Canada recognizes outstanding achievement, dedication to the community and service to the nation. Appointments are made by the Governor-General based on recommendations from the Advisory Council for the Order of Canada. 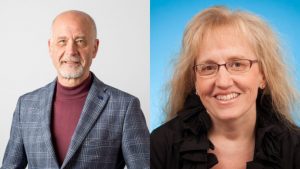 Marchildon was recognized for his contributions to health care policy in Canada and mentorship of the next generation of policy-oriented researchers. Straus was also honoured for her mentorship, as well as her academic achievements in the field of knowledge translation.

Marchildon is the Ontario Research Chair in Health Policy and System Design at IHPME. He is a tenured faculty member of the Dalla Lana School of Public Health with a cross-appointment in the Munk School of Global Affairs and Public Policy and a senior fellow at Massey College at the University of Toronto. Prior to this, he was a Canada Research Chair in Public Policy and Economic History in the Johnson-Shoyama Graduate School of Public Policy, co-located at the Universities of Regina and Saskatchewan. After receiving his PhD at the London School of Economics, his first academic appointment was as an Assistant Professor of Canadian Studies and Economic History at Johns Hopkins University’s School of Advanced International Studies in Washington, DC.

From 1994 until 2000, Marchildon was a senior public servant in Saskatchewan, serving first as Deputy Minister of Intergovernmental Affairs and then as Cabinet Secretary and Deputy Minister to the Premier. In 2001, he became the Executive Director of the federal Commission on the Future of Health Care in Canada, commonly known as the Romanow Commission. Towards the end of 2002, that Commission’s final report Building on Values was delivered to the Government of Canada and released to the general public.

Since 2002, Marchildon’s academic research has focused on health policy, comparative health systems, federalism and the history of Canadian Medicare. In addition to publishing more than 200 journal articles, policy opinions and think tank pieces, he has written major books on these subjects. In 2017, he established and became the founding director of the North American Observatory on Health Systems and Policies.

Straus is an accomplished scientist, physician and advocate for health equity. She holds a Tier 1 Canada Research Chair in Knowledge Translation and Quality of Care, and is the first female physician-in-chief at St. Michael’s Hospital. She was recognized by the Web of Science as being in the top one per cent of highly cited clinical researchers, and is a member of the Canadian Academy of Health Sciences and the College of New Scholars, Royal Society of Canada.

A geriatrician who has focused on providing the best care possible for older adults, Straus’ recent research examined the transmission of COVID-19 in long-term care. In June 2020, she coauthored a report on behalf of the Royal Society of Canada on COVID-19 and the future of long-term care. It identified longstanding deficiencies in the long-term care sector and provided recommendations for urgent action.

A coauthor of more than 500 articles on topics ranging from the gender gap in academia to improving patient care and systems like acute care and long-term care, Straus’ work has consistently provided decision-makers with evidence that has shaped policy.

The Order of Canada announcement was made Dec. 29, 2021. There were 135 new appointees, including two  Companions, 39 Officers, 1 honourary Member and 93 Members.