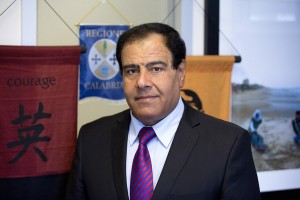 The honour was the latest of many for Abuelaish, author of the best-selling book I Shall Not Hate: A Gaza Doctor’s Journey. Since coming to U of T in 2010 he has received seven honorary degrees. He has been given the Order of Ontario, was nominated three times for the Nobel Peace Prize and received numerous other awards for his efforts promoting peace and women’s health issues.

Abuelaish spoke to U of T News after the York ceremony.

How do these honours make you feel?
It inspires me; it gives me energy and motivates me to do more, to spread the message of peace. It also gives me hope. We need to create a better world because we are accountable to our children. We want them to inherit a healthy and a peaceful world. They deserve it and I believe we can give it to them.

Besides teaching full-time at the Dalla Lana School of Public Health, and giving speeches throughout the world on the need for peace and understanding, you’re writing another book, to be published next year. Could you tell us what the new book is about?
The new book continues from where my first book [I Shall Not Hate] left off. It is focused on the huge challenges facing women in this world. This world can endure only with enhanced roles for women and improved women’s education. We need to invest more in women because they are the main pillars in any house, in any community, in any society.

Speaking of women’s education, earlier this year, two of your daughters graduated from U of T Engineering. You must have been proud.
I’m proud of my daughters, because we are beyond the tragedy [of the death of three of his daughters and a niece in a tank attack during the Gaza conflict]. We were victims, then survivors, and now we are thriving. And we are working to spread this message. On the same day, my son was accepted to Rotman School of Business at the University of Toronto. I’m proud of all of them, I am happy that we made it and we succeeded in overcoming the challenges we faced in Gaza.

Violence continues in Gaza, and has recently flared up on the West Bank and in Jerusalem. How can this conflict be resolved?
I see conflict as a disease, and this disease is flaring up because we just treating the symptoms. It’s time to put these violent means aside and to tackle the world’s problems in a courageous, kind way. It’s easy to retaliate and to seek revenge, but we need to face the reality that there are two nations, the Palestinians and the Israelis and both of them are occupied; the Palestinians are occupied by the Israelis and the Israelis are occupied by their fears. So we need both nations to realize that their safety, their security, their freedom, their future is linked together. Neither is free without the other, and we need to work together instead of confronting each other, to go side by side so we can live free, safe, and secure.

What role does the outside world have to play in resolving the conflict?
It’s time for the leadership of the international community to act, because I fully believe that the Palestinian-Israeli conflict impacts the world’s peace and stability. We have to get rid of this disease of violence which is destructive not only to Palestinians and Israelis. Its consequences go beyond the Palestinians and the Israelis because conflict, violence and hatred are contagious and they cross international borders.

Recently Canada elected a new prime minister. What message would you give to Justin Trudeau regarding the conflict in Gaza and Palestine?
In the election, Canadians said yes to Canada’s humane, peaceful values. I am hopeful that Justin Trudeau can play an active role in mediating between Palestinians and Israelis to bring them together. He can play an active role to say no to violence, yes to peace and yes to a just world by choice, not by force.