‘How do you want to change your school’s environment and what can you do now to make it happen?’ the day’s facilitators and program lead asked.

About 20 high school students from DLSPH’s Outreach and Access Program were gathered on the 7th-floor crush space at the Health Sciences Building on an especially cold Saturday morning last March.

“They’re tackling difficult issues right in their high school community,” says Prof. Ananya Banerjee, a program facilitator. “Our goal is to be like ‘it’s possible.’ As a youth, you can empower yourself, you can take leadership and you can try to take control over things you feel are not working.”

Students received a crash course on how to start a program to bring about positive change in their schools. The lesson was led by Ryan Hinds, an IHPME alumnus and the Outreach and Access Program lead, along with Banerjee and Avantika Mathur, Anisha Mahajan, Shindujan Yogarathnam and Shudipta Shabnam Islam of the South Asian Adolescent Diabetes Awareness Program (SAADAP).

Small groups of students worked together on a program objective and a structured plan. Iman Aziz and his group wanted to stop violence at their school, and possibly in their wider community.

“What keeps me up at night is gun violence,” says the twelfth grader. “It’s a problem in my community.” 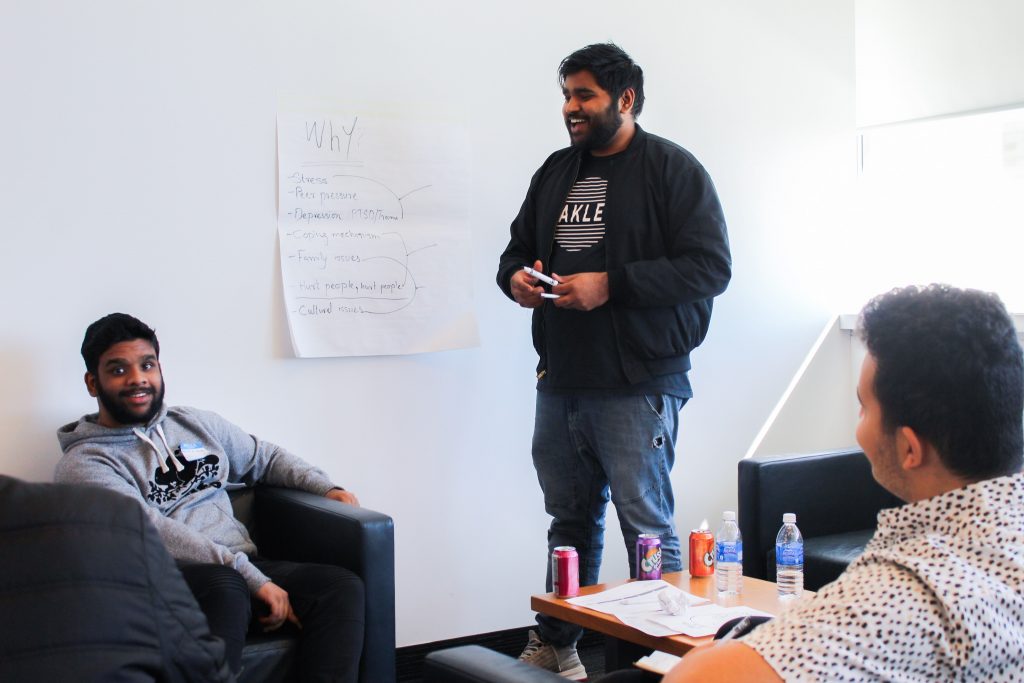 Iman Aziz and his teammates

Aziz was in grade 9 when one of his friends was shot. It wasn’t fatal – he’s happy his friend is still alive. But it took years for him to process. “It gave me some perspective that I really did not want,” says Aziz. “I don’t want this.”

He remains resolved to help his community and hopefully his little brother who is following in his footsteps.

“I have a little brother – you know how teenagers are. I was that teen who was hard to control, and I wasn’t really thinking. I made my fair share of mistakes. I am worried about my brother getting involved in that same kind of thing.”

Aziz says he was involved with the wrong crowd in high school too. He had friends with substance abuse problems and many have been involved in violent incidents. He was involved in an incident that left him with a broken jaw and internal bleeding. “It was pretty rough.”

With his understanding of the violence, Aziz started a small mental health and substance abuse campaign in his community. He worked with the YMCA and the substance abuse council for a short time but his plans never materialized. A lack of support fizzled out the program.

He also tried to join a police initiative, despite feeling that distrust of the police is high in his school and community. He recalls a time when the police arrested someone in the community’s mosque.

His last interaction with the police was at school.  One particular day, a fight between two student groups escalated into school-wide violence. A heavily-armed police team came in to break it up. For Aziz, the response was uncalled for.

“Many refugees and their children live with PTSD,” he says. “Many kids and their parents are trying to escape this kind of stuff. A lot of my close friends are refugees. No 12 to 14 year-olds should be dealing with this stuff.”

After the morning session, Aziz and his group came up with a new idea to tackle the violence at his school by focusing on mental health.

Other students like Fiona Ferrera and her team hope to make a difference in people’s physical health. “I want to look at sleep deprivation,” she says. “People see it as a cool thing not to sleep. Even the teachers think it’s cool.” The group hopes to improve the school’s spirit overall.

“It has a lot to do with how you feel at school and your mental health and just your overall feel for the school and what you take to university,” says Ferrera.

With a love for science and helping people, she applied to one nursing program and the life science program at U of T. Should she decide to go to U of T, students from the Outreach and Access Program Program are invited into its fellowship program. Program mentors work with students to help them succeed throughout their undergraduate studies. 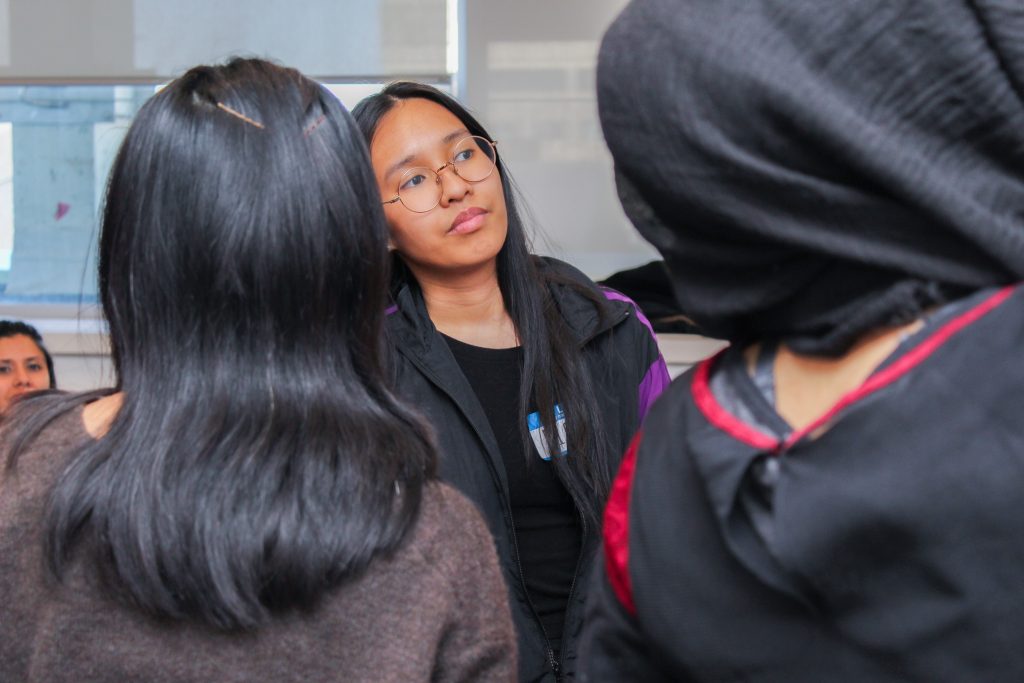 Fiona Ferrera and her teammates – Outreach and Access Program

That day, while facilitator Mathur brought down what would be a full course into a single day, they were still running short on time. “We didn’t get into evaluation really,” says Mathur. “Initially, I had an activity for each step of the process but then I thought it’s best to focus on the overview and then focus on key things that I have found useful, for example, the importance of a needs analysis.”

Mathur sees it on her day-to-day as a program coordinator – people go into a situation thinking they have the solution, she says. There’s no stakeholder engagement or relationship building. “It’s a no brainer that you should get your target audience into the door from day one and have them be part of the process.”

She hopes students come away with an idea of how to “action” some of their ideas. “We wanted them to go home with resources as well – a roadmap on program development.”

“Nobody is asking them what to change. What would they prefer?” says Mathur. The group she was chaperoning claimed that some of their friends were not motivated to go to school. It was a big enough problem for them to develop a program.

While Aziz and Ferreira tackled sleep and mental health, other students worked on absenteeism, school spirit, racism and discrimination. They are issues recent graduate and facilitator Islam wishes were dealt with in her high school.

“I think it’s so great that these students already know exactly what they’re talking about and the fact that they’re are having conversations on race and discrimination. These are concepts that I never really learned in high school,” she says. “I always thought about it and felt a certain way about it, but I did not know what terminology to use and how to name it. I didn’t realize it was a thing until I got older until I got into my last few years of university.”

The year-round Outreach and Access Program is run by DLSPH and IHPME alumni. They encourage high school students to consider a career in public health. For students like Aziz, the program is much more than a public health crash course – he appreciates the leadership from mentors like Hinds, “Ryan has a way of mentoring – it’s direct and subtle at the same time.”

Hinds takes the program to heart but also wants students to take action immediately. This is not just talk. 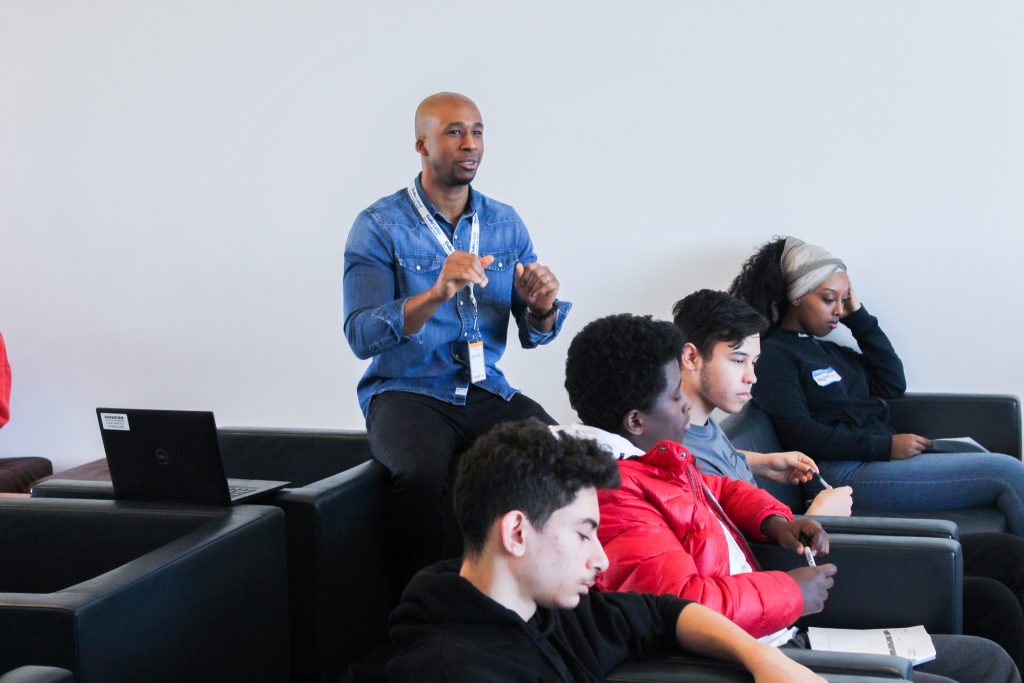 “There’s an expectation that students will start using the basics of program development but we’re starting at a smaller scale just to develop the practices and competencies,” Hinds says. “The biggest gap is first believing that they can actually have an impact on their communities and then knowing how to do that. It’s not the desire – we want to enable them. It’s important to provide that knowledge to them early on. We start while they’re in high school.”

Program leads hope that students will continue to work on the program during the school year and present their work to administrators – the pandemic has derailed some of those plans including the Summer Institute which was supposed to kick off this month. Instead, Hinds has developed and online version of the week-long introductory program in public health for the students.

Overall, Hinds says the Outreach and Access Program allows students to consider university and public health. “We want to provide guidance to the bright minds in from racialized neighbourhoods like these. We hope to attract them to public health and train them at UofT. We know not all are aiming for U of T,” says Hinds.

“To be honest, not all these students were aiming to go to university and now at the very least it’s an option. Most weren’t thinking about U of T as an option and now many are. They didn’t understand what public health was, nor how they would fit into a role within it. Now I can confidently say that many do know and are understanding how they might fit. More importantly, they are understanding how public health and social determinants are having an impact on their life and the world,” says Hinds.