DLSPH’s Outreach and Access Program continues to have an impact on more Toronto high schools. It completed its first semester at Westview Centennial.

“It feels great that the program continues to expand and that we’re continuing to develop relationships and reaching more schools, more students, and more communities within the city,” says Program Lead Ryan Hinds. 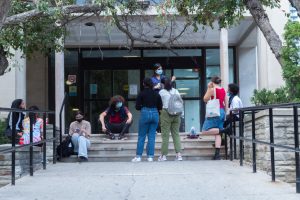 A group of students from the Outreach and Access Program are working on their debate.

“We’re only starting to scratch the surface of what the program can become and the impact it can have,” says Hinds who is also DLSPH’s Director of Equity, Diversity and Inclusion.

Since 2018, the program has raised awareness of non-clinical career paths in health care to young leaders in underrepresented communities. The program’s goal is to prepare future leaders for influential roles in public health and the broader health system.

While the Outreach and Access program went online during the pandemic, its week-long Summer Institute this past August presented an opportunity for an in-person, outdoor meeting. Students were joined by program alumni that helped them prepare for a debate on a theoretical, but very relevant, topic:

“In a hypothetical post-COVID world that is seeing a resurgence of a similar virus, should the city lockdown again?” Students were designated sides to argue. 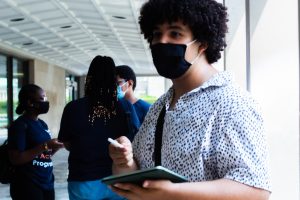 Bilal Bartaai was on the “yes” side. Since joining two years ago, he’s found the program to be everything he expected. “In my sophomore year, I got an email [from my guidance counsellor] that said, I was to speak with Ryan very soon. And I was very confused,” says the student who is in grade 12 at the Marc Garneau Collegiate Institute.

“But I was also very intrigued. And so, I did a little bit of research on Dalla Lana and the program on what it meant and what it does,” he says.

He finally spoke to Hinds. “And so, since then, I’ve been attending the sessions going to the after-school events that they’ve held. And it’s been a blast so far,” says Bartaai.

He attended the program’s final in-person session just before the pandemic which helped him gain the foundational learnings on program development.

Bartaai has always been deeply interested in wildlife but is still working on honing these interests into a career. The path is getting clearer each day. He is considering many universities including U of T and the University of British Columbia to pursue environmental science or ecology.

“I’m very interested in the environment, environmental science and wildlife ecology. All of that is kind of where I want to head. But honestly, I don’t have a very definitive path as of right now.”

On the opposite side of the debate was Shamar Small who just entered grade 10, but at Runnymede Collegiate Institute. 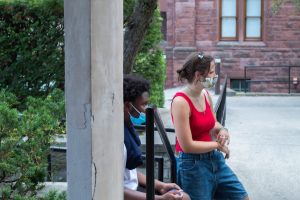 Student Shamar Small is working with this team on their strategy

Small was also invited to join the Outreach and Access program. “After joining a couple of sessions and seeing what was going on, it seemed like a pretty cool program, a program that I could learn a lot of things from, a program I could grow in and better as a person, not as a student, and just overall just grow and learn more things,” says Small.

A major goal of the program is to impart critical thinking skills. Bartaai recalls DLSPH Prof. Arjumand Siddiqi presenting graphs and trends about health outcomes among marginalized people. In the analysis, she demonstrated to students a trend that variables couldn’t explain.

“It was interesting in the sense that the reason for a certain trend that she and her team were seeing on a graph was something that they wouldn’t have been able to pinpoint unless they had really thought outside of the box,” says Bartaai.

“I kind of realized that to be successful or to find that little extra competitive advantage, you really need to look outside of what it is you’re used to. And sometimes the answer is not in front of you. It’s way far out.”

Bartaai attributes that realization to Prof. Siddiqi’s presentation. “They were trying to solve something that has to do with politics or racial injustice, which is not something that researchers would go to right away, even though it makes 100 per cent sense in hindsight. But at that moment, you don’t really think about it.”

It is that type of thinking, Bartaai says, that gives any student a competitive advantage in everyday life.