“What if the trees stopped breathing?”: How U of T faculty are spreading seeds of knowledge for environmental repair and reconciliation

“What if the trees stopped breathing?”: How U of T faculty are spreading seeds of knowledge for environmental repair and reconciliation

Walking north along McCaul Street toward College, you may not immediately notice the narrow garden on the side of the Dalla Lana School of Public Health (DLSPH) building. It is a small sliver of green space surrounded by buildings that compete for, and often win, your attention.

However, this small garden is anything but insignificant. 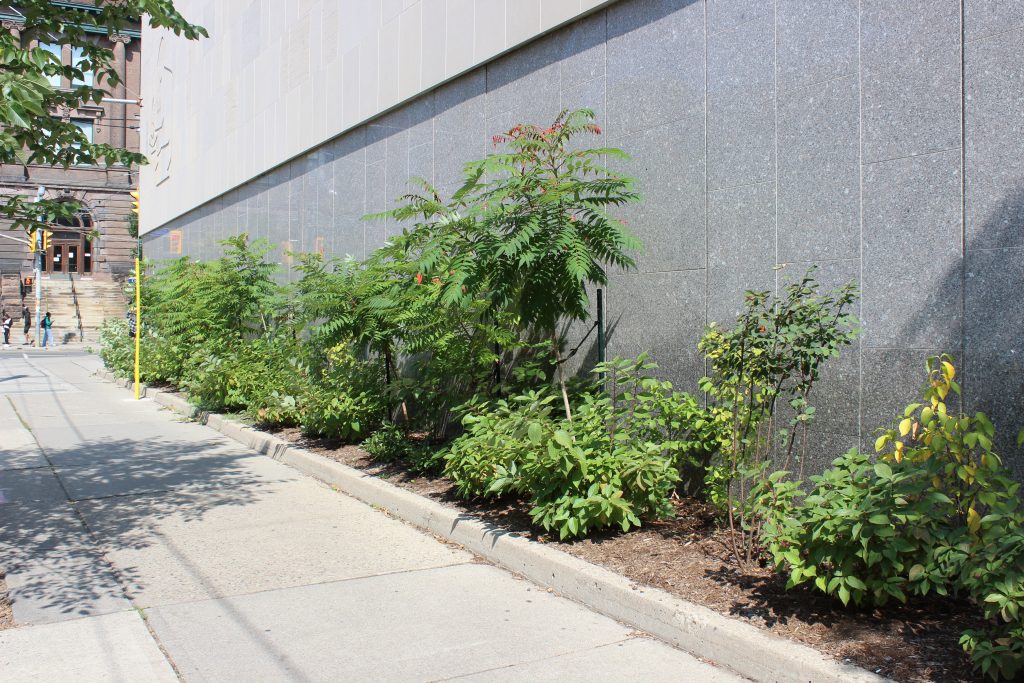 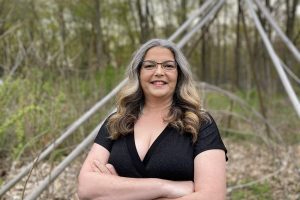 Last year, Prof. Angela Mashford-Pringle, Associate Director of the Waakebiness-Bryce Institute for Indigenous Health, collaborated with Elder Whabagoon and Associate Professor Liat Margolis, both from the John H. Daniels Faculty of Architecture, Landscape and Design, to renew this space with plants native to the land. This project was about addressing U of T’s Truth and Reconciliation Calls to Action for Indigenous Spaces on campus and to demonstrate and advocate for decolonial land-based teaching and environmental stewardship.

Elder Whabagoon is an Ojibway Elder who sits with the Loon Clan. She is a Keeper of Sacred Pipes, a member of the Lac Seul First Nation and a 60’s Scoop survivor. For the past five summers, she and Margolis have led a unique summer access program called Nikibii Dawadinna Giigwag (NDG) that shares traditional teachings with Indigenous youth and shows them how to integrate this knowledge to landscape architecture and ecological design. 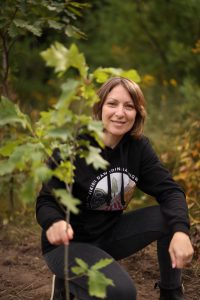 During the winter semester in 2021, a group of Margolis’ students produced three concepts for the garden and in late summer, the youth prepared the space according to the chosen concept. The garden is now lush with plants such as serviceberry used for medicinal and edible purposes, staghorn sumac consumed as tea to treat colds, and red osier dogwood for basketry, ceremonial pipe tobacco and constructing sweat lodges and fish traps.

Margolis adds that each plant has a fruit that wild animals can eat. “We think about all of our relations, all of our kin,” she explains. “We envisioned this planting along McCaul Street as a place where Angela or other instructors at the Waakebiness-Bryce Institute could visit with an Elder or Knowledge Keeper and share teachings around these plants.”

In addition to traditional medicinal and teaching benefits, native plant gardens are vital as we face a warming world. “Indigenous people have been on these territories in Canada, the United States and globally for thousands of years,” says Mashford-Pringle. “We were taught our teachings about how to keep the natural world in order. Our languages come from the land, from interactions with the land…If we really want to get out of this climate emergency, we need to start talking to Indigenous people who know how to deal with it.” 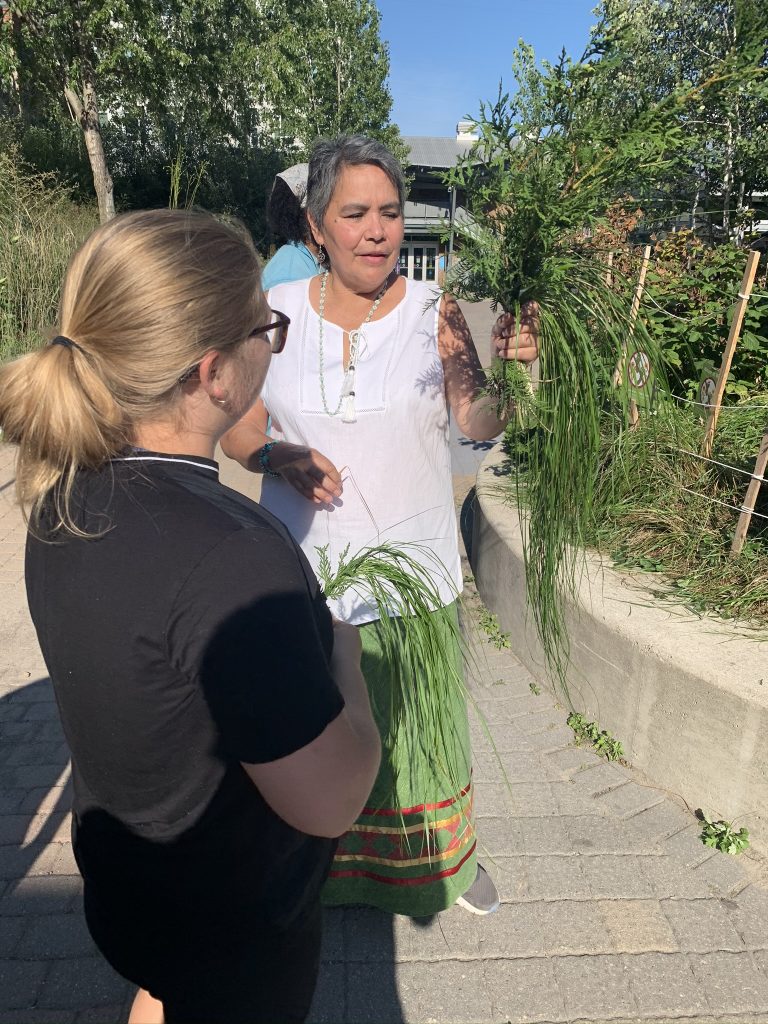 In Elder Whabagoon’s talks, she has posed a series of questions, “What if the trees went to war? What if they stopped breathing for a day? What would happen to us?” By asking these questions, Elder Whabagoon shows how the relationship between nature and humans is connected. A fact that can be easily – and tragically – forgotten when living in downtown Toronto. But Indigenous gardens like the one on McCaul serve as reminders of this interdependence.

Elder Whabagoon says that NDG and programs like it work to educate young people about the inherent agreement humans have with the land. “We just have to keep working for the next generation,” she says. Parents of youth participating in the program have come up to Elder Whabagoon in the past to say, “What have you done with my daughter or son? They’ve changed. They actually read books. They are trying more.” After a long history in which Indigenous people in Canada were targeted with colonial campaigns to erase their cultures, languages and beliefs, programs like these plant seeds of curiosity in youth to learn more about their heritage.

And many in the next generation are listening. Maggie Devins-Cann, a student at Trent University has attended the Nikibii Dawadinna Giigwag Access Program since high school and credits it with the educational path she is on. “I am going into my second year at Trent University in the Indigenous Environmental Studies and Sciences program,” says Devins-Cann. “I was always interested in environmental studies but didn’t know much about my culture when I was younger. Going into this summer program, I gained a really big passion for learning about it.” 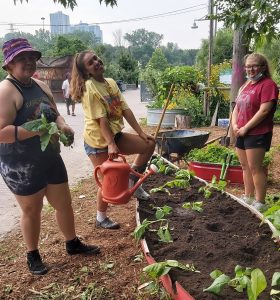 Mashford-Pringle is also working to expand Indigenous practices and teachings inside the course offerings at DLSPH. She has introduced land-based learning and renovations to Hart House Farm. “I don’t like our classrooms at St. George. People don’t get to look at each other. We don’t know what circles are,” she explains. This is why she has developed a course where students live, study and cook together at Hart House Farm in Caledon. Through learning from Indigenous Elders and Knowledge Keepers while on the farm, students recognize the urgent importance courses like these play for both environmentalism and reconciliation. But what about back in the city?

“Often times, you get a little corner somewhere, a little circle area and again, it’s sadly not unlike the reserve system saying, ‘well, here’s your spot, here’s your little space where you can gather.’” This isn’t enough when it comes to addressing truth and reconciliation or Indigenous spaces, explains Mashford-Pringle. “If you look at the map of St. George, let alone the other campuses, we have the incredible capacity and responsibility to make an enormous impact on the landscape – in terms of increasing vegetative cover, increasing biodiversity, providing habitat, providing food sources, and edible landscapes so that we never go hungry.”

The garden on McCaul Street may be small right now, but with hope and commitment, much more of campus can see the reintroduction of native species and Indigenous ways of learning. “We need to think about what our role is as an urban campus to environmental stewardship,” says Mashford-Pringle. “That to me is the core of foundational and Indigenous thinking.”